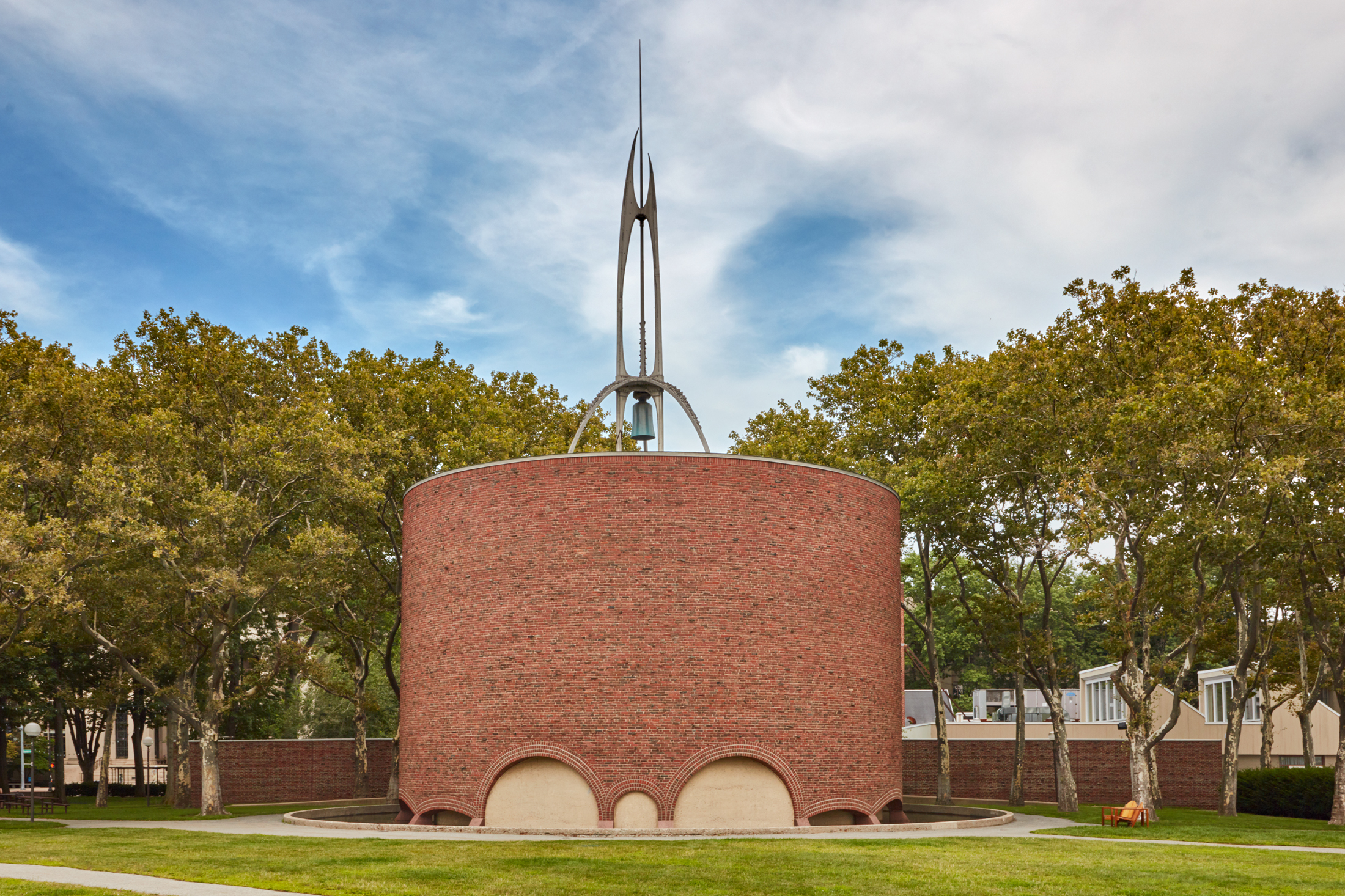 The MIT Chapel (Building W15) sets itself poetically apart—both formally and spatially—from the rectilinear language that dominates much of the campus’ architecture.

Eero Saarinen sought to design an intimate space that would maintain a visual linkage with the campus through the familiar use of Boston brickwork but still hold its ground against the monumentality of William Welles Bosworth’s system of buildings. The cylindrical form harkens back to Renaissance tombs—notably, Donato Bramante’s Tempietto in Rome—while the undulating curvatures recall the rich contours found in Baroque architecture.

The exterior is punctuated by clinker bricks, or bricks deformed by excessive heat, giving the surface a variegated texture that mimics the facade of Alvar Aalto’s Baker House. A shallow moat circumscribes the structure, and a glass-bound perimeter slot in the main gathering space allows light to be reflected on the surface of the water and diffused into the room, deftly blending interior and exterior. An oculus above the altar also draws in a cascade of light that bounces off a delicate metalwork screen, Harry Bertoia’s Altarpiece for MIT Chapel (1955). The impulse to build a campus chapel (along with its pendant, Kresge Auditorium) grew out of a postwar institutional interest in reinforcing the humanities and centering student life and communal gathering as part of the campus experience. Then-MIT president James Killian invoked the New England meetinghouse as a guiding concept for the nondenominational space.

Eero Saarinen (1910–1961) was born in Kirkkonummi, Finland, and was the son of architect Eliel Saarinen and sculptor and textile artist Loja (Louise) Saarinen. In 1923, his family emigrated to Bloomfield Hills, Michigan, where both his parents taught at Cranbrook Academy of Art. He studied sculpture at the Académie de la Grande Chaumière in Paris and architecture at Yale University, graduating in 1934.

After traveling around Europe on a scholarship, he returned to the US to teach at Cranbrook, where he became head of the Department of Industrial Design. Saarinen is widely recognized for his innovative furniture designs, many of which were produced with Knoll. Drawing inspiration from organic forms, his iconic works, such as the bent plywood Side Chair (designed in collaboration with Charles Eames), the Tulip Collection, and the Womb Chair, feature fluid contours and unified forms.