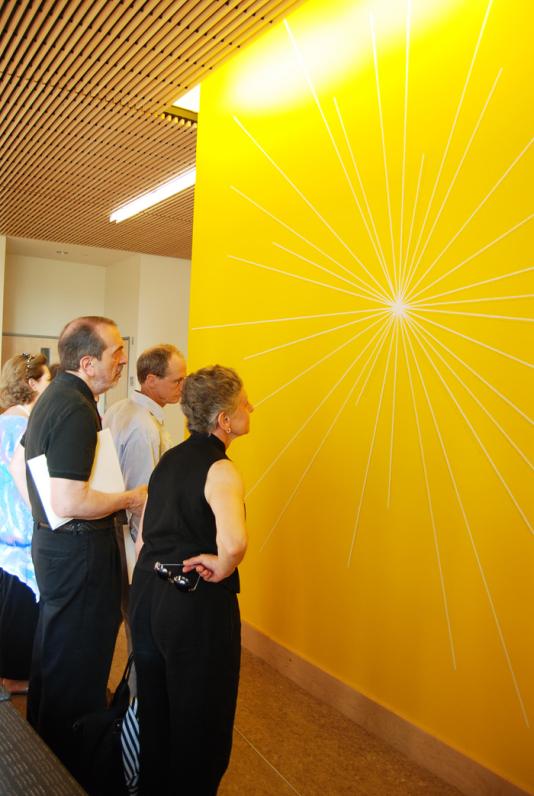 Gift of Dorothy and Roy Lavine

Sol LeWitt began each of his wall drawings by creating a set of instructions. These instructions might specify the lengths, colors, or positions of hand-drawn points and lines, sometimes in relation to other architectural features.

A draftsperson following these instructions can then realize LeWitt’s work by drawing on a wall. His instructions can be interpreted differently, and in many cases allow for a significant degree of variation. LeWitt also noted that if a wall drawing needed to be relocated, its present form must be removed and the piece redrawn in the new location.

The instructions for Wall Drawing #254 (White Lines from the Center of a Yellow Wall to Specified Random Points) specify that the draftsperson should choose the placement of the lines’ endpoints based on the wall’s specific dimensions. (This iteration was executed by Anthony Sansotta, a longtime assistant to LeWitt, with assistance from Dirk Adams and Nell Gould.) As the work’s title indicates, LeWitt chose the colors and overall shape of the drawing. Resembling a star or shining light, the piece is both energetic in its color and calming in its simplicity. It might evoke a moment of inspiration, and it also suggests the intersection of different elements, like the spokes of a wheel, which is fitting for its installation within a gathering space.

Sol LeWitt (1928–2007) was born in Hartford, Connecticut. He studied fine art at Syracuse University from 1945 to 1949 before serving in the Army in Japan and Korea. In 1953, he moved to New York, first attending the Cartoonists and Illustrators School, which became the School of Visual Arts, and then working as a graphic designer for architect I. M. Pei. In 1962, his work shifted from paintings and graphic design toward abstract reliefs, followed in later years by geometric reliefs and works that could be produced in serial and modular units. In 1968, he produced his first wall drawing, a form he would continue to explore for decades. During this period, LeWitt also published celebrated writings on Conceptual Art, and he is credited with both naming and exemplifying the Conceptual Art movement, which emphasized the intellectual processes involved in artistic production over the conventional concerns of painting and sculpture. LeWitt had solo exhibitions at major international institutions, including the Museum of Modern Art, New York; the Wadsworth Atheneum, Hartford, Connecticut; the Tate Gallery of Art, London; and the Whitney Museum of American Art, New York. His work is held by many public collections, including the Detroit Institute of Arts, Michigan; the Guggenheim Museum, New York; the Metropolitan Museum of Art, New York; the Museum of Fine Arts, Boston; and the National Gallery of Art, Washington D.C., among others.