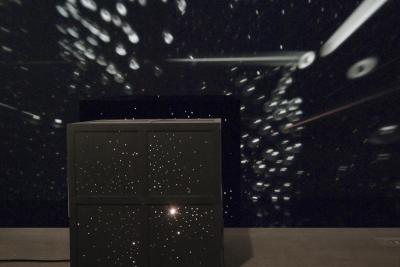 The MIT List Visual Arts Center is pleased to collaborate with the Goethe-Institut Boston to present two rarely screened films and videos featuring the work of Otto Piene.

The film Olympia Regenbogen/Olympic Rainbow (1972) was first intended by Piene as a means to both document his eponymous work of “Sky Art” for the 1972 Munich Olympics and provide an entry to the aesthetic and experience of the live event. Unexpectedly, the film also documents the audience’s experience, who had days earlier witnessed the mediatized deaths of 11 Israeli athletes being held hostage. The artwork was a multicolored helium-inflated sculpture installed for the closing ceremony of the Games, consisting of five horizontal, parallel polyethylene tubes and with each tube appearing in one of the five colors of the Munich Games. When fully inflated, the sculpture formed an arch 2000 feet long, the rainbow stretching over the Gunther Behnisch-designed Olympic Stadium. As the stadium’s structural form–acrylic glass canopies secured by metal ropes–was architectonically pioneering, Piene’s Olympic Rainbow is the largest and most difficult work of art the artist has created. Its success was made possible in part by Walter Lewin, an MIT physics professor and authority on balloon-born X-ray astronomy.

Black Gate Cologne. Ein Lichtspeil (1968/69) was the result of a collaboration between Otto Piene and Aldo Talbellini and is historically noted as being the first joint production by artists working with television.  This Cologne-based WDR German television production allowed Piene and Tambellini to build on concepts developed in an earlier multimedia live action event BLACK Air.  That work had been performed in the Black Gate, a theater in New York opened by the artists in spring of 1967. Produced in 1968, and subsequently broadcast in 1969, Black Gate Cologne. Ein Lichtspeil brought together such diverse elements as happenings, studio audience interaction, Piene’s light sculptures, and Tambellini’s layering of transparencies, film, and video imagery to create a new electronic, visually charged work. The production utilized five studio cameras, eleven sources of image and sound material emerging from eleven monitors, four projection screens, and large loudspeakers to create a 47 minute recording.  This is the original director’s cut; editors at the station cut the length of the program to 27 minutes for its final broadcast version.

This program is FREE and open to the general public. 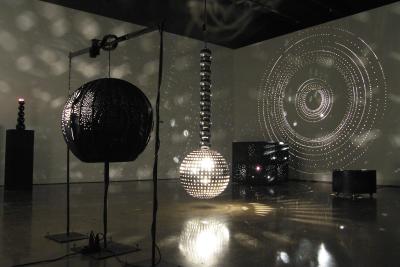