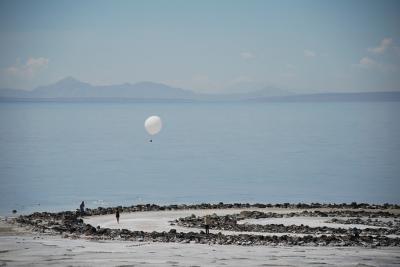 In 1972, the American artist Robert Smithson wrote, “I am for an art that takes into account the direct effect of the elements as they exist from day to day apart from representation. …Nature does not proceed in a straight line, it is rather a sprawling development. Nature is never finished.” Today, Smithson’s massive work of entropic land art on the Great Salt Lake, Spiral Jetty (1970), changes color and texture in relation to changing water levels and sediment deposits, while art world ambassadors have advocated against nearby oil drilling on the basis that it would disrupt the formal composition of the work.

How have earth works of the 1960s and 1970s transformed as a result of the “never-finished” progression of nature, and how do we understand the limits of human intervention in this process? How do curators, conservators, historians and activists interpret and care for earth art within evolving critical frameworks for preservation and ecology?

The 2016 Lavine Lecture presents a discussion between Francesca Esmay and James Nisbet, tackling the complex matter of eroding land forms within the cultural context of shifting categories of nature and culture. This event is free and open to the public, but registration is required.

About the Lavine Lecture Series

This program is being offered in connection with the HTC course “Landscape Experience: Seminar in Land/Art” co-taught by Caroline A. Jones and Rebecca Uchill in Fall, 2016. Support for the course has been provided by the MIT Center for Art, Science & Technology (CAST) and the MIT Alumni Class Funds.

James Nisbet is Associate Professor in the Department of Art History and Director of Graduate Studies for the Ph.D. Program in Visual Studies at the University of California, Irvine. He works on modern and contemporary art, theory, and criticism, with special interests in environmental history, the history of photography, and media studies. Nisbet’s book Ecologies, Environments, and Energy Systems in Art of the 1960s and 1970s was published by MIT Press in 2014.