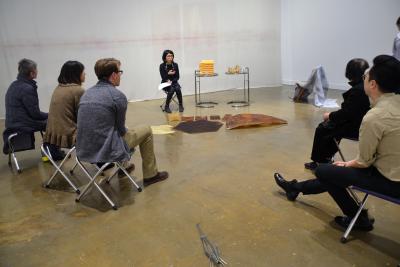 Catalyst Conversations is pleased to present a conversation between composer Tod Machover and evolutionary biologist Kevin Esvelt. In a world capable of destroying itself, both speakers are interested in helping our society make big and imperative changes: Machover with his crowd-sourced City Symphonies and Esvelt with Sculpting Evolution, which invents new ways to study and influence the evolution of ecosystems. They ask many questions, among them are these: Can the boundaries of hatred be broken? Can art do this? Can science do this? Can music be a way to radically break down boundaries? Can changes be made by tweaking nature itself? Their conversation will explore issues they are both passionate about and compelled by in their respective projects.The conversation will be followed by a reception in the Lower Atrium. Arrive early for the conversation and visit the List’s galleries, open specially at 6 pm.

Kevin Esvelt leads the Sculpting Evolution group at the MIT Media Lab, which invents new ways to study and influence the evolution of ecosystems. By carefully developing and testing these methods with openness and humility, the group seeks to address difficult ecological problems for the benefit of humanity and the natural world. Prior to joining the Media Lab, Esvelt wove many different areas of science into novel approaches to ecological engineering. He invented phage-assisted continuous evolution (PACE), a synthetic microbial ecosystem for rapidly evolving biomolecules, in the laboratory of David R. Liu at Harvard. At the Wyss Institute, he worked with George Church to develop the CRISPR system for genome engineering and regulation and began exploring the use of bacteriophages and conjugation to engineer microbial ecosystems. By emphasizing universal safeguards and early transparency, he has worked to ensure that community discussions always precede and guide the development of technologies that will impact the shared environment.

Tod Machover leads the Opera of the Future group. An influential composer, he has been praised for creating music that breaks traditional artistic and cultural boundaries; his music has been performed and commissioned by some of the world’s most important performers and ensembles. He has received the “Chevalier de l’Ordre des Arts et des Lettres,” one of France’s highest cultural honors (1995); was the first recipient of the Arts Advocacy Award from the Kennedy Center for the Performing Arts (2013); and was recently named 2016 Composer of the Year by Musical America. He has composed five operas and is the inventor of Hyperinstruments, a technology that uses smart computers to augment musical expression. Hyperinstruments have been used by performers such as Yo-Yo Ma, Prince, and Peter Gabriel. He is also the creator of City Symphonies, which invite entire communities – from Toronto to Perth to Detroit – to sonically collaborate on a grand scale. His research group is currently examining ways to use music productively in medical and wellbeing contexts.