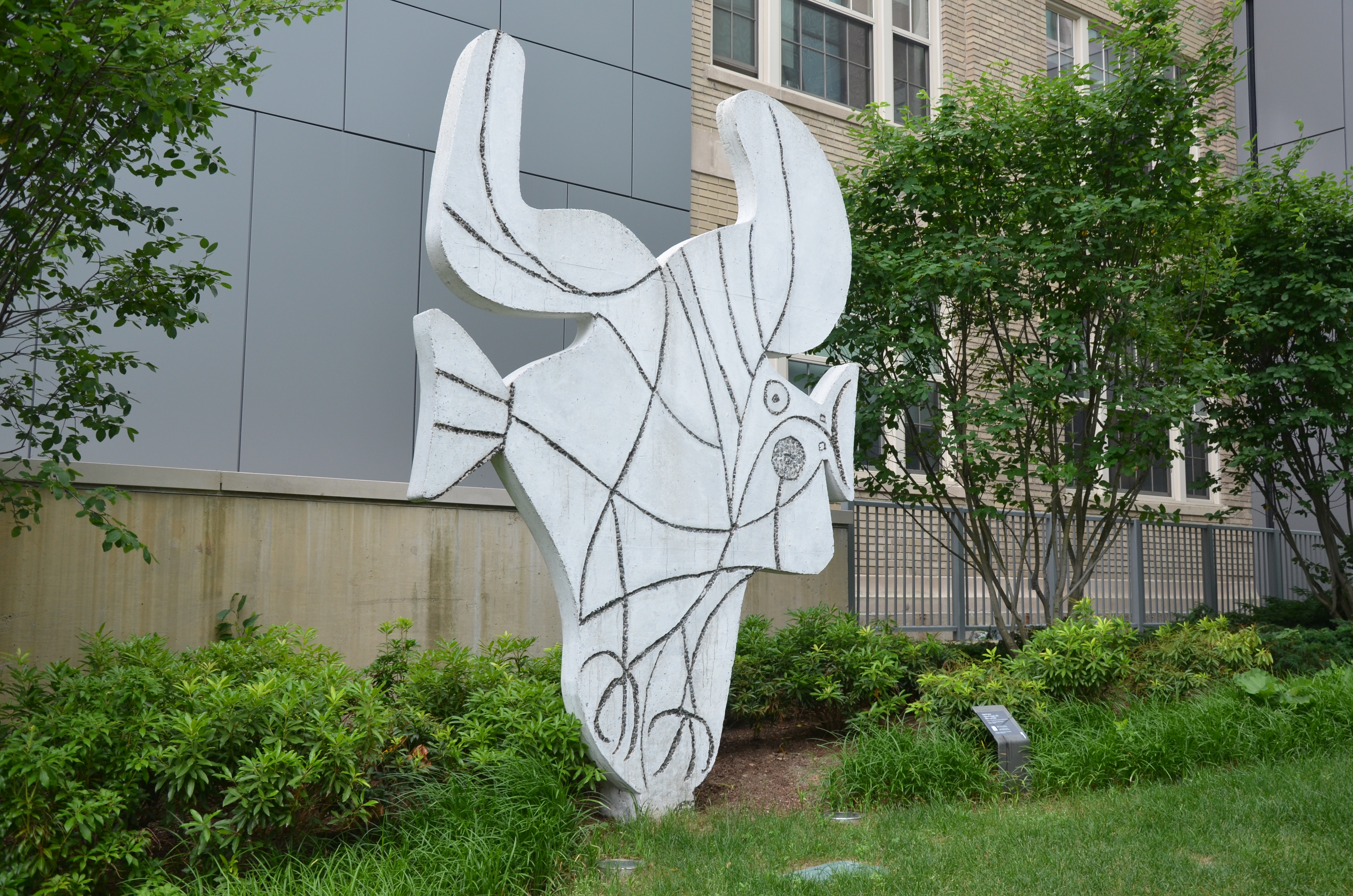 Purchased with funds made available through an anonymous gift to MIT

Pablo Picasso, while best known for paintings and drawings that established Cubism, also applied his restless energy to sculpture.

His earliest known sculpture, modeled in clay to be cast in bronze, was made in 1901; he subsequently produced more than a thousand three-dimensional works. Picasso generally worked in two sculptural modes: he either modeled clay or plaster in the round for casting in bronze, or he constructed open-form works from cut or found pieces of sheet metal, metal rods, wood, or cardboard. During the 1950s and ’60s, he developed in the latter mode a series of sculptures that were cut from a single sheet of wood or metal and painted. The painted wood and metal cut-outs are closer to painting and drawing than are most of his sculptures and underscore the importance of surfaces in articulating the forms represented.

Figure découpée is among the concrete cut-out sculptures Picasso conceived during the 1950s. It grew out of a series of ink notebook drawings of birds in flight and was originally executed in 1958 in oil on wood. Its overall shape and interior line drawing combine to represent a bird with head and beak to the right, tail to the left, feet below, and spread wings above. The process behind this version of the work, béton-gravure (concrete engraving), was developed in Oslo by the architect Erling Viksjø and the engineer Sverre Jystad. A Norwegian artist, Carl Nesjar, introduced Picasso to the process and adapted it for the monumental scale of this planar sculpture. A wooden form in the shape of the sculpture was filled: first with an aggregate of dark gravel or crushed stones, and then with poured concrete to bind and face the aggregate. The concrete surface was then sandblasted through a template of the painted lines and areas of tone on a wood or metal version of the sculpture; this exposed the color and grain of the aggregate underneath and permitted furrows of varying depth and width. Picasso had long desired to make monumental sculptures; béton-gravure was a process well-suited to the translation of his planar sculptures into durable materials on a monumental scale.

Pablo Picasso (1881–1973) was born in Málaga, Spain, the son of painter, curator, and art teacher José Ruiz Blasco. He showed a talent for drawing as a child and entered La Lonja, Barcelona’s school of fine arts, at age 14. He received his first solo exhibition in Barcelona in 1900. That year he made his initial trip to Paris, where he settled in 1904. From café scenes and portraits, he moved through the melancholy works of his Blue Period (1901–04) to the lighter-hearted subjects and beige and pink tones of his Rose Period (1904–06) to more extreme experimentation with form and line influenced by ancient art, African sculpture, and art of various cultures and times.

With Georges Braque, Picasso developed Cubism in paintings and collages, which led to his growing fame and influence. His Cubist work extended to sculpture, a medium he pursued more thoroughly after contact with fellow Spanish artist Julio González in the late 1920s. During this period, Picasso also explored neoclassical idioms. He became briefly involved with the Surrealist movement in the 1930s, and in 1936, deeply affected by the Spanish Civil War, he created Guernica (1937), a monumentally scaled indictment of the horrors of war.

In 1939, Picasso received what was then his largest exposure in the United States with an exhibition at the Museum of Modern Art. Another major exhibition of his work occurred in 1955 at the Musée des Arts Décoratifs in Paris. Innumerable exhibitions of his work followed, throughout his life and following his death. His works are in the collections of most museums of modern art. During the last decades of his life, Picasso lived in Mougins, on the French Riviera. He maintained a studio, producing drawings, paintings, ceramics, prints, and sculpture until his death in 1973. 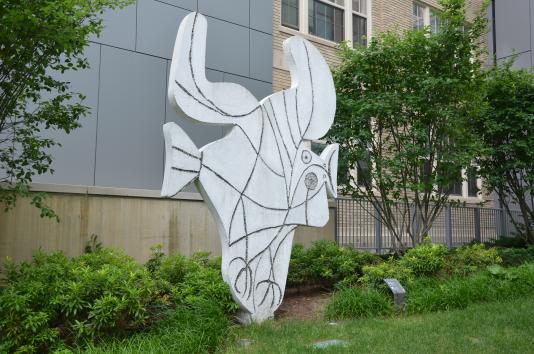 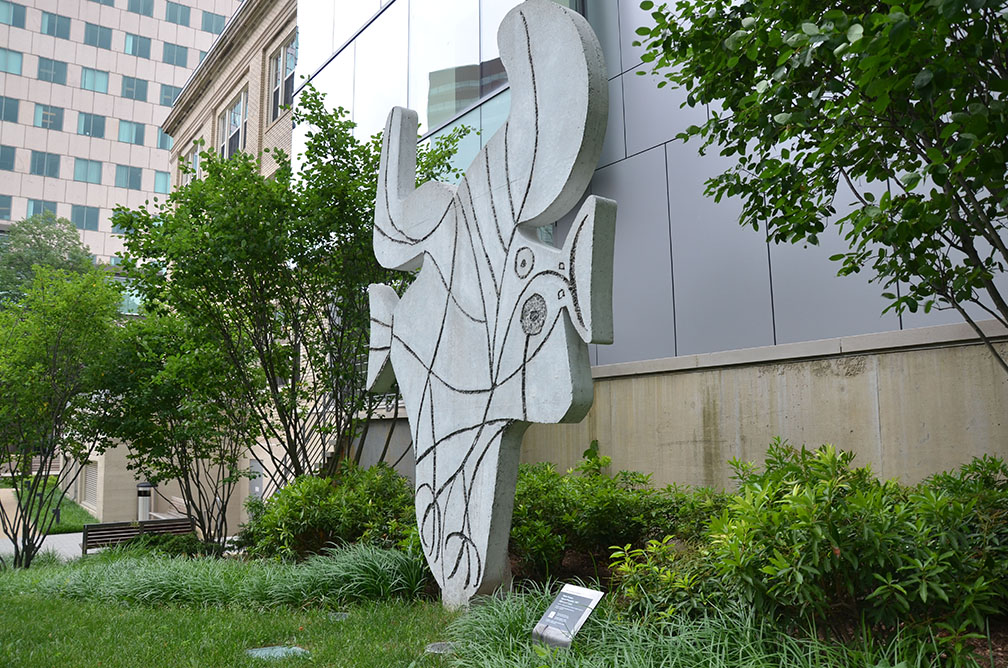 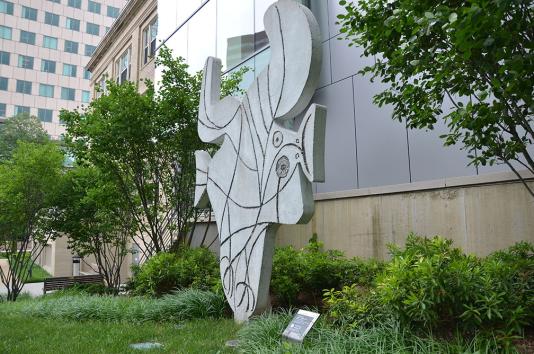