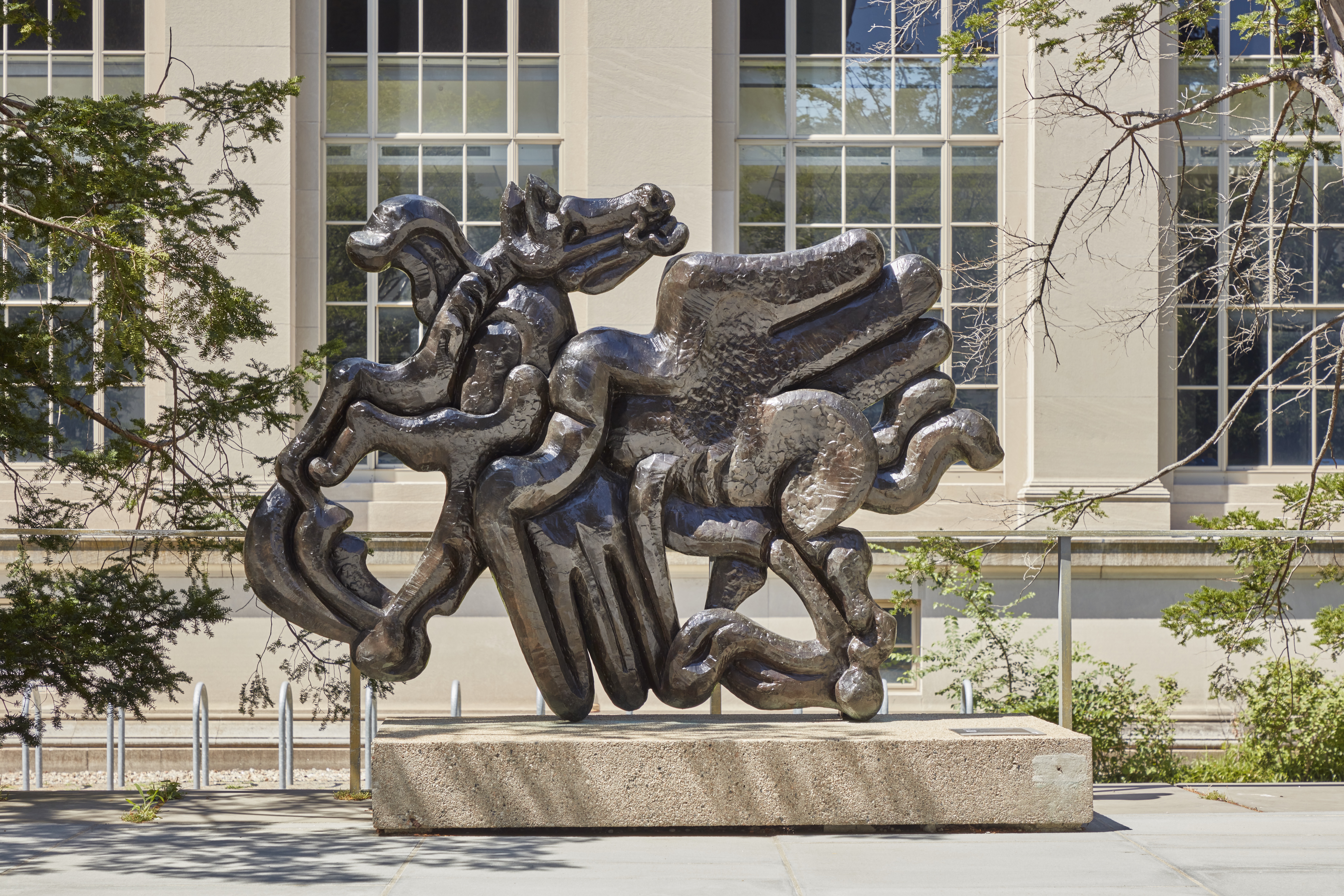 Gift of Yulla Lipchitz in Memory of Dr. Jerome B. Wiesner

Jacques Lipchitz spent his formative years in Paris studying sculpture and developing his oeuvre in the company of the foremost Cubist painters, including Juan Gris and Pablo Picasso.

By 1930, he began to introduce more overt themes and human content into his work, bringing to an end what he called his “Olympian period” of formal exploration with hermetic content. Sharp contours, smooth surfaces, and geometric patterns gave way to naturalistic or expressively distorted anatomies, strongly modeled surfaces, and irregular contours. Tragic, violent, and ecstatic themes in subjects of mythological or religious origin predominated.

Birth of the Muses, grew out of a series of small sketches from 1944 responding to the myth of Pegasus, in which a winged horse alights on Mount Olympus. Where its four hooves touch the ground, four springs of water emerge, out of which the muses are born. In its allusion to the birth of inspiration, the story also relates to Lipchitz’s autobiography, as he felt a surge of renewed creative energy in New York after escaping war-torn France in 1941. In Lipchitz’s first maquette of this work, Pegasus was shown frontally. For this larger bronze, the artist turned him in profile and developed the sculpture in a high relief that is nonetheless fully finished in the round. Lipchitz identified this piece as the germ of his subsequent and final sculpture, the monumental Bellerophon Taming Pegasus, dedicated at Columbia University in 1977.

Jacques Lipchitz (1891–1973) was born in Lithuania as Chaim Jacob Lipchitz. After studying engineering at a secondary school in Vilna, he moved to Paris in 1909, where he attended classes at the city’s prestigious École des Beaux-Arts, Académie Julian, and Académie Colarossi. From the stylized figurative sculpture of his early years in Paris, Lipchitz’s work gradually developed as he absorbed ideas from Cubist painters of his time. By 1915, he had evolved a fully Cubist sculptural idiom. Lipchitz worked in France until the German invasion in 1940, after which he immigrated to New York. From that point on, his sculpture became more narrative and autobiographical, emphasizing biblical or personal themes. Lipchitz exhibited regularly in exhibitions in Paris beginning in 1912 and received the first of numerous solo exhibitions in 1920. His works have been displayed at the Petit Palais, Paris; Portland Museum of Art, Maine; Museum of Modern Art, New York; the 26th Venice Biennale (1952); Corcoran Gallery, Washington, D.C.; San Francisco Museum of Art; Walker Art Center, Minneapolis; Detroit Institute of Arts; the Metropolitan Museum of Art, New York; and numerous other international venues. Lipchitz is especially remembered at MIT for his support of the Institute’s program in the arts. In 1965, students enrolled in Professor Stanford Anderson’s seminar on modern art were invited to tour his studio in New York.

Listen: Deborah Rothschild on Jacques Lipchitz's Birth of the Muses